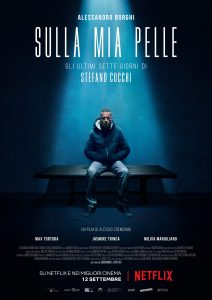 In collaboration with DUDE, the studio Matteo Tranchellini has worked on the “Sulla mia pelle” ’s movie poster as photo editor and digital photo post production, the Italian movie is directed by Alessio Cremonini and produced by Netflix.

The film was selected as the opening film for the “Orizzonti” section at the 75th Venice Film Festival. It tells the last week of Stefano Cucchi’s life, interpreted by Alessandro Borghi.

The post-production of the project involved the movie poster, which appeared in all Italian cinemas and on the streaming channels in 190 countries from September 12, 2018. At the preview of August 29, 2018 at the Venice festival, in the Orizzonti section, collected seven minutes of applause.

0
Cookies
To make this site work properly, we sometimes place small data files called cookies on your device. Most big websites do this too.
Accept
Read more